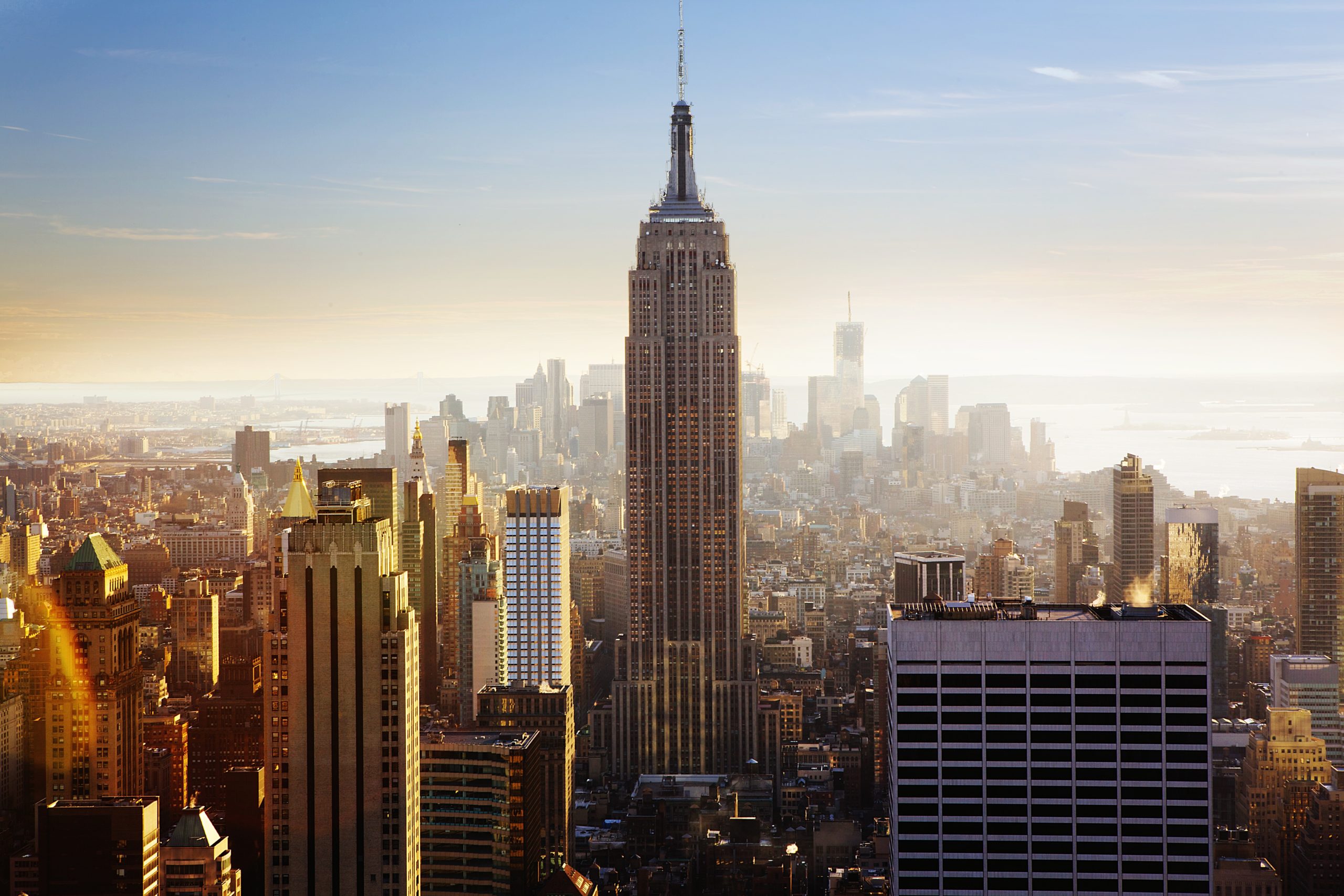 Remaining one of Manhattan’s tallest and most beautiful art deco skyscrapers, it also represents the power, style, and romance of New York City like no other. Its distinctive silhouette and design, indelibly etched into the city’s skyline, is a triumphant symbol of New York City’s success, allure, and promise.

The image of the Empire State Building is instantly recognized across the globe. It is the world’s 3rd most “Instagrammed” landmark, being posted well over 1.5 million times since 2013.

Since 1976, the building’s colored lights have been used to recognize various events, holidays, occasions, and organizations. In 2012, this tradition became even more dramatic with the installation of a computerized LED light system capable of displaying and instantaneously changing 16 million lights. The Empire State Building Light Show series features light displays synchronized with iHeart music stations.

The Empire State Building Observatory is Manhattan’s #1 tourist attraction, with 4 million visitors each year. Besides having the best 360-degree view of Manhattan, on a clear day, visitors can see New York, New Jersey, Pennsylvania, Connecticut and Massachusetts.

It’s a popular destination for not only sightseeing, but many a romantic interlude. When the atmospheric conditions are just right, the static electricity on the deck can actually cause a spark when people kiss. With all this romance in the air, it’s a popular place to get engaged. There is even a contest every year to select a dozen or so couples to be married atop the Empire State Building on Valentine’s Day. 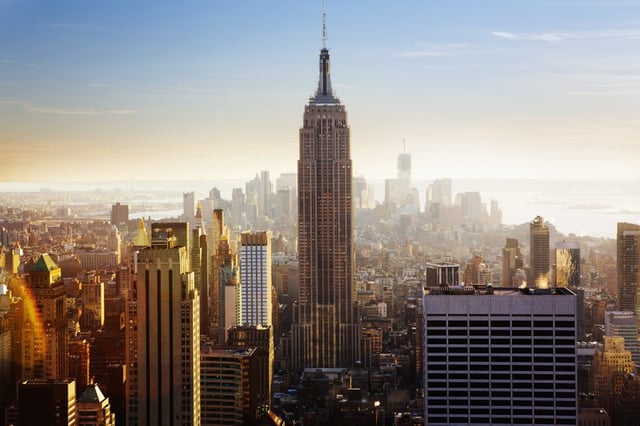 The Empire State Building made its cinematic debut in 1933—just two years after its actual debut in the New York skyline—playing second fiddle to possibly only King Kong himself in this culturally and cinematically significant film.

When a film crew travels to a mysterious island to “make a picture”, they discover a gigantic, prehistoric ape that winds up becoming obsessed with the film’s leading lady, Ann (played by Fay Wray). The film’s unscrupulous and greedy director uses Ann to lure Kong into captivity. Kong is transported to New York City, where he is displayed and taunted for the amusement of audiences. Kong goes berserk and busts free of his chains, wreaking havoc throughout Manhattan and kidnapping Ann.

Kong instinctively seeks refuge atop the highest point he can find. In the film’s climax, he scales the walls of the Empire State Building with Ann in tow, ultimately meeting his demise in an epic battle with multiple airplanes attacking him with a torrent of bullets.

In 1933, King Kong was a box office success when it debuted at New Roxy Theater, raking in $90,000 on its opening weekend, $20,000 on its initial release with sub-sequent re-releases totaling over $10 million.

The Empire State Building as a romantic meeting place is an appealing theme, serving as a central plot element in several movies and re-makes, starting with the 1939 tear-jerker, Love Affair.

Two star-crossed lovers (played by Irene Dunne and Charles Boyer) meet and fall in love on an ocean liner, despite being betrothed to others. In an iconic scene on the ship’s deck as it approaches New York’s Harbor, they make a date to meet again when they are free to be together. With the Empire State Building materializing through the fog in the background, they agree to meet atop it six months later.

Unfortunately, a tragedy befalls Dunne’s character on her way to their sky-high rendezvous, rendering her paralyzed and unwilling to burden her lover with her condition. Only after a heartbreaking period of estrangement and misconception does the pair reunite and begin their lives together.

The movie was so successful that it has been remade twice—as An Affair to Remember in 1957 (starring Deborah Kerr and Cary Grant), and again in 1994 as Love Affair, with husband-and-wife team Annette Bening and Warren Beatty. 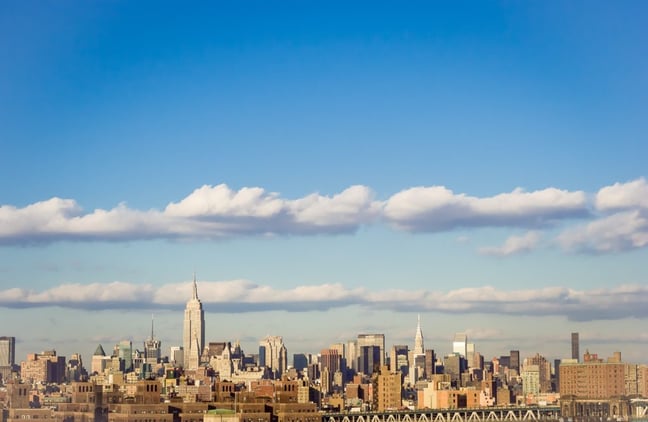 Based (in part) on Love Affair and An Affair To Remember, Sleepless in Seattle is arguably one of Hollywood’s most successful romantic comedy/dramas. The film was able to capitalize on the proven charm of a climactic romantic encounter atop the Empire State Building without some of the heavier dramatic elements of its predecessors.

Written and Directed by Nora Ephron, and starring Meg Ryan and Tom Hanks, this box office smash was the quintessential “chick flick” of the 1990s, grossing over $228 million worldwide.

Sam (Hanks’ grieving widowed character) receives some unsolicited matchmaking assistance from his son Jonah. After convincing his father to share his feelings on a radio talk show, hundreds of women write to Sam, including Ryan’s character. Dispassionately engaged to another man, she impetuously invites Sam to meet her on the deck of the Empire State Building after hearing his story and watching a scene from An Affair To Remember.

Through a series of events, near misses, and with a lot of help from Jonah, fate eventually brings them together in the concluding scene of the film. Through some Hollywood magic, the scene was actually shot on a set created to look the Empire State Building’s Observatory.

In the film Superman II, Christopher Reeve (in the title role) chooses to save the planet instead of following his heart and becoming mortal (in order to live a normal human existence with his love, Lois Lane).

After a shockwave from a bomb inadvertently frees three imprisoned Kryptonian criminals, they try to take over the world, with earthly villain Lex Luthor’s assistance.

Superman is compelled to help, and reverses the procedure he underwent to become mortal. He engages in a battle royal with the Kryptonian villains in New York City. When Superman hurls one of them into the Empire State Building’s tower, it becomes loose and begins to plummet towards the street below.

Only through Superman’s renewed powers (and love for the human race) is he able to swoop down at the last minute to avoid the tower crashing down onto people on the street.

Superman ultimately defeats the Kryptonian foes and Lex Luthor, and selflessly decides to stay immortal in order to help mankind. 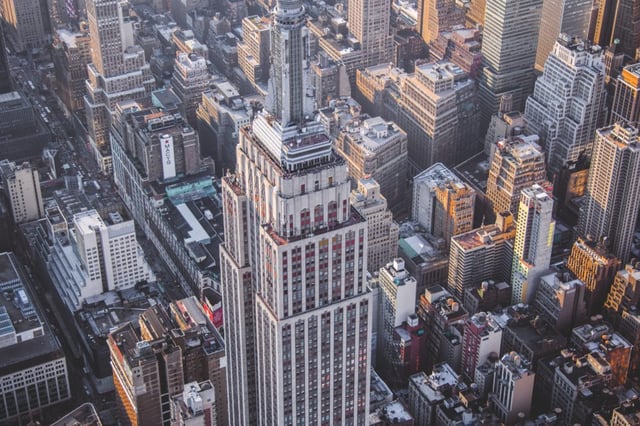 Elf, starring Will Farrell as the film’s hero, Buddy, is a modern-day Christmas classic. When Buddy discovers he’s not a real elf, he decides to leave the North Pole to find his biological father Walter (James Caan).

The awkward reunion with his father causes Buddy to experience the Empire State Building and other Manhattan landmarks, as he eventually warms Walter’s cold heart and ultimately saves Christmas.

The Full Range Of Cinematic Exposure

The 1964 film was recognized for its cultural significance by being added to the U.S. Library of Congress National Film Registry in 2004.

Check out more of the films and TV shows that feature the Empire State Building.